I’m going to begin this post by quoting song lyrics from the very popular movie Frozen.  From the song titled Let it Go:

Only five lines but boy do they pack in meaning!  If I were to reflect back on some of the worst times of my trial, I would see many days of tears, but more so holding them back.  Most of us know as that song plays out, she let’s go and stops hiding who she really is.  But is she really being true to herself and her emotions?  If you saw the movie, then you know when this song happens, she is angry and secluded herself from family, friends and the town.  What exactly did she let go of? I think she actually let go of the very things she secluded herself from, and in that respect, she has lost people who love her.

Grieving a loss can be so complex, and it is natural for us to want to be alone, and not let anyone see how we are being affected.  Doing so, can result in much anxiety, stress, and may eventually lead to mental and physical breakdowns.  So, what are we supposed to do with our tears…I say give them to God, and allow him to use as fuel for your healing.

God is the one who holds every tear you cry in his hands.  We can “Let it go” as the song encourages, but first, we must give everything over to God and then let Him dispose of it.

All of the hurt, frustration, anger, and other countless emotions that you are feeling during your loss or even healing period, let God have it all.  God’s hands will become a place of respite, which you can cry into.  Every tear that falls is blessed, kissed and held ever so tightly in His hands.

I can share with you my own experience when one day I allowed myself to cry in God’s precious hands.  I had made the decision to let my tears become my strength, and no longer allow them to bring me down.  In prayer, I laid it all in His hands and it proved to be a very freeing experience.  It won’t always be easy, some things we go through are so hard that it almost seems like the acknowledgment of them to God, is accepting the situation as something you are ok with.  That does not have to be the case!  In surrendering the circumstance, you are merely letting God know that you need his healing upon you and the issue.  It can be very helpful for your emotional well being, to place your feelings into blessed hands.

So give yourself a cry fest! Let it all go! Allowing God’s hands to hold every tear for you, and replenish you with a loving grace that will ultimately result in a happy heart.   If you have difficulty with the thought of this type of prayer, then go to a trusted friend or advisor, share your feelings, and ask them to hold your tears, while you walk in your path to healing.

I’d love to hear your thoughts or experiences!

Psalm 107:19  “Then they cried to the Lord in their trouble, and he saved them from their distress” 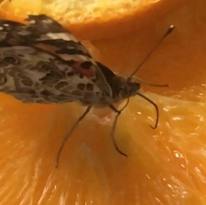 I have had an amazing butterfly experience!  As I mentioned previously, I was able to bring home two caterpillars in the hopes of being able to be part of their transformation. I am happy to report that I was able to observe every stage, and at times I felt myself going through every change right along with them.

It took just two days before they headed to the top of the cup and attached themselves to the lid.  It is in this spot where they would hunker down and prepare for the inevitable. Because they were in such a confined space, they really didn’t have much of a choice as to where they could go and safely transform.  Being able to hatch and release butterflies in homes or schools is something that has been going on a for a while, but it still didn’t change the fact, their environment as they knew it, had forever been changed.

I had no idea how that one movement of the caterpillars would remind me of what I experienced at the beginning of my trial.  I too was forced to hunker down in a confined space . It was not my choice; my emotions and peace of mind were not safe;  and the environment as I knew it, was about to be forever changed.

hang it in the hatching habitat.  During this process one of the chrysalis’ came loose and fell to the bottom.  I immediately reached for my instructions to find out what to do.  The instructions were to gently scoop it up with a spoon and place it on a paper towel.  It said most likely the butterfly would still be able to hatch without any damage.  Needless to say, worry was setting in.

Once I really thought about what the caterpillar may be going through, I was brought back to a moment when I was curled up in a ball in the corner of my kitchen, hoping I would come out of my experience without any damage. 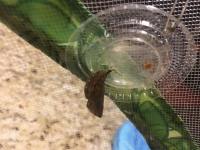 Once in the chrysalis the caterpillars will hatch within 7-10 days, and I made sure to keep an accurate count.  I was even able to set up a butterfly web cam so I wouldn’t miss a trick!  Guess what? I missed two tricks!  The first butterfly emerged prior to the camera being set up, this was the one at the bottom of the habitat.  I was so happy to see it had survived, that it eased my disappointment in not witnessing it.  Knowing the second one was just a day behind I stayed close by the web cam.  Just as a little kid knows when you are watching, this butterfly took a 7 minute window in the 30 minutes I had been away from the camera to come into our world.  Luckily for me the web cam took photos of movement and I was able to view it after the fact.

Excitement mounted high for me, knowing I was going to sleep that night with butterflies in my room and in the same moment, sadness set in knowing they would soon be released.  I knew all along that would be the outcome, but a part of me wanted to hang onto them forever if I could.

For a very long time I wanted to hold on to the feelings I had for my ex.  I felt sadness knowing that someday those feelings would no longer exist and a part of me wanted to cling to them.  The sane part of me knew that releasing the energy surrounding these feelings was the best thing I could do in order to heal.  Instead of holding on, I was able to finally release and let it go just as I would have to with the butterflies.

When I wrote Out of The Chrysalis; Free to Fly I thought I had fully experienced the similarities of the caterpillar during transformation.  The witness of this metamorphosis, has shown me that my book was just the beginning of fully understanding, not only the caterpillars experience, but also my own.

Stay tuned for the conclusion of the butterflies journey in my next post Accepting Transformation part 2.

Have you been able to see similarities in life situations? Please share in the comments. 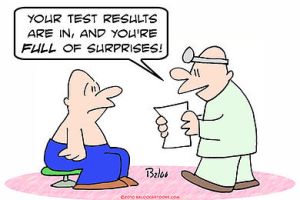 Results are good, everything checks out except for the following:  There are trivial amounts of an abnormality and the source is unknown. You may go about your normal daily activities.

Would you find this helpful on your healing journey or do you see it as a way to hide an underlying reason for what you are suffering with?

When I was in the midst of my divorce I tried very hard to make sure my life looked normal.  I did a lot of pretending, some saw through it but other’s did not.  As I look back now, I think if I had just let things ride out naturally without hiding my actual feelings I may have made my healing process a lot easier.

Instead I chose to make it look like my life was normal knowing inside that there was an “except for” clause attached to it.  Unfortunately, I let that feeling of normalcy be a guide to making some poor decisions.  I was living as if the results were 100% what I wanted them to be, when in reality that was far from the truth.

So, am I behind in my healing journey because of that,  or am I that much further ahead for recognizing it?  When I think back to what I can apply it to I am reminded of a series of questions and answers.

Q:  You look like your handling things very well are you ok?  A:  Ya, it get’s better every day.

I could go on but will stop at those that were asked the most.  The important thing is what all of these have in common.  Every question resulted in a normal answer, one that seemed like everything was in control.  However, each answer neglected to give the details about the “except for” that I felt with every part of my being.  Same questions but honest answers: 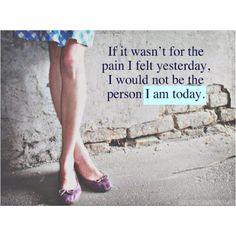 A:  I’m great except that I feel like my life is a mess, and I’m not sure how I will come out of all of this.

A:  Every day is a constant struggle I need all the help I can get to make it through my day.

A:  I need the prayers of everyone I know to make sure I survive this.

The first set of answers were all warm and fuzzy right?  Sugar coating makes us feel better and we appear to be strong to those who are watching us survive our tragedy.  But are we just hampering our healing and the ability to move on if we are not being honest with how we are actually feeling?  Healing from anything can be a very long process and we all do it in our own time.  Nothing is cut and dry especially when it comes to getting “normal” results.

My advice to you is, if you want a 100% normal result, put in the effort to achieve it. Be honest not only with yourself but with those around you and let them carry you on whatever part of your journey they are meant to be on.  It will be worth it.

If you can relate to acting normal but living with the “except for’s” please share your stories.

Personal information will not be sold or traded or used for any other purpose than to communicate with you regarding your story. Please understand that by providing your story you are hereby acknowledging that your story may be used in connection with a future book or a future writing authored by this site and it's current administrator.